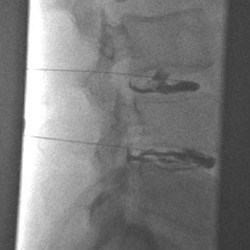 In case of discography, the contrast agent is injected into the disc through a very small needle. This is done sterilely under CT- or X-ray-guidance in an operating room. Besides the application of a contrast agent and the analysis of the images, there is a pressure test with a special manometer, which measures if a disc is abnormally sensitive to pain. According to this information, physicians can find the disc, which is pathologically  degenerated.

A discography is indicated if a tear in a disc is expected, which could not be proven by an MRI examination.