Peter Braun, M.D., studied human medicine at the University of Bonn and worked at Cedars-Sinai Medical Center, Los Angeles/USA and the UCSD Medical Center, San Diego in California/USA during his elective.

After a comprehensive education in general and accident surgery in Unna and in orthopedics in Dortmund, Germany, he received his orthopedic license in 2000.

From 2001 on, he has been focusing on the conservative and surgical treatment of arthritis and pediatric orthopedics.

From 2005 until 2012, he was the leading surgeon at the Evangelisches Krankenhaus Köln-Kalk, Germany, specializing in knee and hip replacement surgery.

In 2013, Mr. Braun became a partner at Beta Klinik and is responsible for knee and hip replacement surgery and the comprehensive treatment of diseases and injuries of the musculoskeletal system. 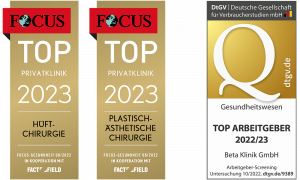