The Beta Klinik operations listed here are performed in a minimally invasive manner, conducted via open surgery or done laparoscopically. 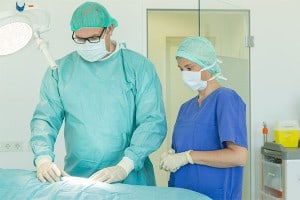 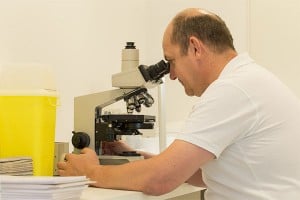 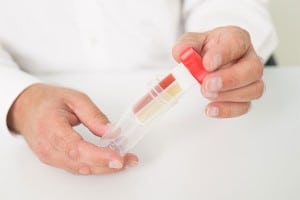 The following outpatient surgeries are performed in the outpatient operating theatre:

The following inpatient procedures are performed in the Beta Klinik operating theatres:

When drugs such as Viagra, Cialis and Levitra prove unsuccessful, a penis prosthesis is the best and most sustainable option for the treatment of erectile dysfunction.

In cases of renal cancer, tumours are either removed in an organ-saving manner or completely, i.e., via nephrectomy.

For the treatment of prostate cancer, the prostate is removed, if possible, in a nerve-protective (erectile-protective) manner.

In cases of suspected bladder cancer, the area concerned should be examined via a cycstoscopy or a transurethral resection of the bladder (TURB). To complete such procedures, the most modern flexible endoscopes, including highly sensitive imaging technology (narrow band imaging/NBI), are available at the Beta Klinik.

In cases where the muscles are affected, the entire bladder will be removed at the Beta Klinik. Urinary diversion is effected by means of customary methods, such as orthotopic bladder replacements made from intestine with urethral connection, or the use of urine bags.

This relatively rare, malignant disease of the penis must be treated via partial or complete penile removal. If necessary, lymph nodes in the groin and/or pelvic area are also removed.

Younger men between the ages of 20 and 40 are predominantly affected. The Beta Klinik carries out all necessary steps associated with this illness, from the first examination to surgery and, if necessary, chemotherapy. Further treatment using chemotherapy or irradiation is planned and implemented by the interdisciplinary tumour board. The tumour board is comprised of pathologists, radiation therapists, oncologists and urologists.

Gender reassignment surgery is performed at the Beta Klinik. We usually offer male-to-female gender reassignment. The neoclitoris is microsurgically implanted to preserve the neurovascular bundle.

Women particularly suffer from overactive bladder, which does not respond well to drug or Botox treatment. The use of a bladder pacemaker is a very successful solution for this condition. First, a test phase is completed to determine whether a bladder pacemaker is suitable. If the test phase proves successful, a pacemaker can be inserted by means of a minor procedure. The battery must be replaced after 8-10 years.

Many women suffer from stress incontinence, which means they experience urine leakage when coughing, sneezing or laughing. When conservative therapy, which is offered in the form of pelvic floor training at the Beta Klinik, does not create the desired effect, a small sling is surgically placed under the urethra. Success rates for this procedure reach 80%, even after several years.

The term “prolapse” refers to prolapsed pelvic organs. These include the bladder, the uterus, the vaginal stump after removal of the uterus, and the rectum. A prolapse of these organs can lead to numerous, varying complaints. Patients often suffer from urge incontinence, stress incontinence, urge symptoms, defecation problems and pain during sexual intercourse.

Depending on the severity and extent of the symptoms, different surgical techniques can be used to correct a pelvic organ prolapse, either via the vagina or the abdomen. Minimally invasive methods are also used.